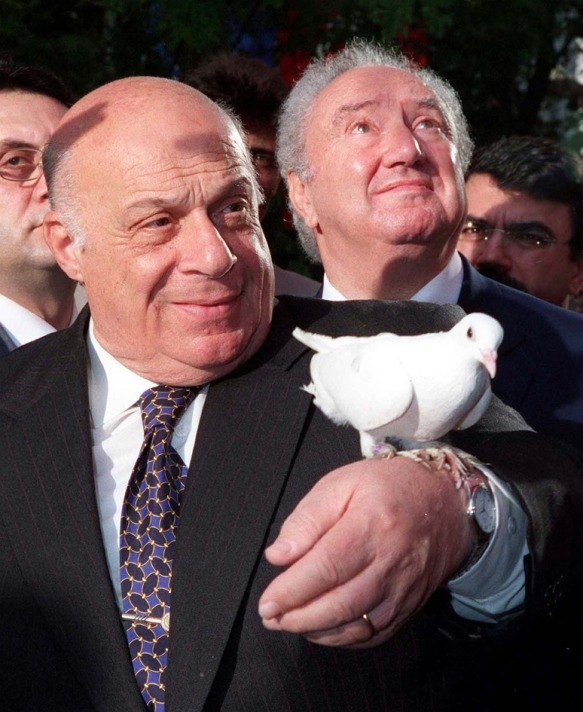 A statesmen, lawyer, journalist, and a teacher, Rauf Raif Denktaş was born in Baf (Paphos) in Cyprus on 27 January 1924. He graduated from the English School in 1942 after which he worked as a court clerk, interpreter, and teacher. In 1944 he went to the United Kingdom to study law and graduated from the Lincoln’s Inn in 1947. That same year, he returned to Cyprus to start his own law practice.
In 1948 he served as a member of the Consultative Assembly in search of self-government for Cyprus and became a member of the Turkish Affairs Committee. He was appointed as a prosecutor at the Attorney General’s Office in 1949, a job he held until 1958.
After resigning from his government duties, Denktaş started to play a more active role in the affairs of the Turkish community. He was elected as the chairman of the Federation of Turkish Cypriot Associations from 1949-1957. Meanwhile Denktaş took interest in journalism and wrote many articles on the problems of the Turks on the island in the newspaper, Halkın Sesi, published by Dr Fazıl Küçük. When the ENOSIS movement, trying to incorporate Cyprus to Greece, turned to terrorism and started to attack the Turkish Community, Denktaş assumed a leading role in organising the Turkish Cypriot Resistance movement.
Denktaş advised the Turkish Government on the rights of the Turkish Cypriot people during the preparation of the Zurich and London Agreements in 1958, which paved the way for the creation of a bi-communal partnership state after the British withdrawal in 1960. He was also the head of the Turkish Cypriot Delegation to the Constitutional Committee drafting the Cyprus Constitution.

With the establishment of the Republic of Cyprus in 1960, Denktaş was elected as the President of the Turkish Communal Chamber. After the unconstitutional expulsion of the Turkish Cypriots from their public posts and the collapse of the partnership state in 1963, Denktaş went to Ankara to continue with his struggle in consultation with the Turkish Government. Since his entry to the island was prohibited by the Greek administration, he could only return in 1968 and took up duties as the vice President of the Republic of Cyprus and President of the Turkish Cypriot Administration.
Following the Greek coup in Cyprus on 15 June 1974 and the landing of the Turkish troops on the island in July 1974, Denktaş played a key role in the proclamation of the Turkish Federated State of Cyprus. He is the founder of the National Unity Party in 1975. In the presidential election of 1976 he was elected as the President of the Turkish Federated State of Cyprus and was re-elected for a second term in 1981. In 1983, President Denktaş was the ‘architect’ of the proclamation of the Turkish Republic of Northern Cyprus. He was elected as the President in 1985, 1990, 1995, and 2000. He has also been the chief negotiator in the U.N. sponsored peace talks since 1968.
President Denktaş was married and has two daughters and a son. He is fluent in English and Greek. He is a very keen photographer. His photographs have been exhibited in many parts of the world. His other hobbies were dog-training, poetry, writing, nature in general.
He is the author of more than fifty books.
He has been awarded Honorary Degrees by more than thirty universities.

Turkish Cypriot leader and President of the Turkish Republic of Northern Cyprus. Born in Baf (Paphos), Cyprus, in 1924. Married Aydın Münir in 1949. Has two daughters and a son.

Career: Teacher, 1942-43; lawyer, 1947-1949; member of Consultative Assembly in search of self-government for Cyprus and member of the Turkish Affairs Committee, 1948; Junior Crown Counsel to the Attorney-General’s Office, Crown Counsel and Ag. Solicitor-

He is fluent in English and Greek.

He is married. He has had 3 sons and 2 daughters. He has lost two of his sons. The first one while undergoing an operation and the second in a traffic accident. Today he has one son, 2 daughters and 11 grand children.

His is the author of 50 books. He has held several photographic exhibitions in various countries.

Granted honorary membership by the Turkish Writers Association for his work and for the tenacity with which he clarified his ideas in his works.

Honurable Member of the Union of European-Asian Taekwon-do Federations, 27 October 1999

Denktaş As A Photographer, Images From Northern Cyprus, Lefkoşa (Nicosia) 1991.

The Cyprus Problem and the Remedy, Lefkoşa (Nicosia) 1992.